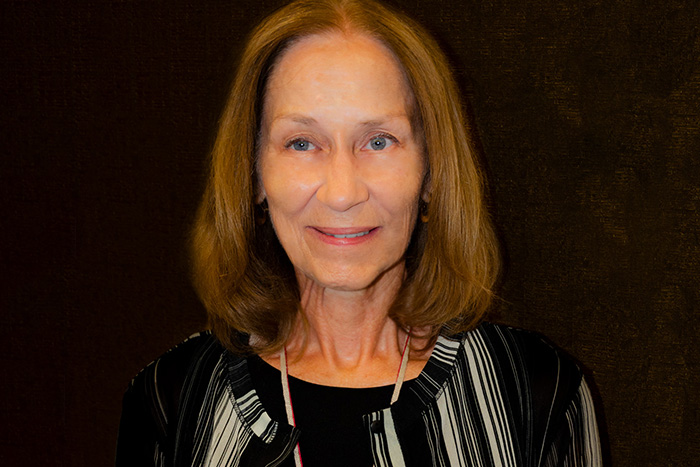 From Paralysis to the Pandemic, Darlene Risch Touches on Her 50 Years of Perseverance and Triumph at Gate City Bank

Despite being paralyzed from head to toe in July 1973, Darlene Risch began to feel something she had never fully felt before. It all started with a knock at her hospital room door. And then another.

“Work colleagues visited me regularly during the two months I was hospitalized,” says Risch, Mortgage Compliance Officer. “I couldn’t move or speak, but they sat with me anyway, expressing their love and support. They even let me know my salary and position would remain intact as I recovered. That’s when I felt it – a sense of loyalty and appreciation toward Gate City Bank I simply couldn’t put into words.”

Risch had been with the bank a year when she was diagnosed with Guillain Barre syndrome. It’s a rare disorder in which the immune system attacks the nerves, leading to total paralysis. The exact cause of this mysterious illness remains unknown, and there is no cure to this day.

There’s treatment and hope for people like Risch, however, whose speed of recovery was described as a miracle by her doctor. She celebrated her 50th work anniversary on May 26, 2022, the longest tenure in Gate City Bank’s history.

“It’s actually gone by really fast,” Risch says with a chuckle. “I guess you just have to enjoy the work you do and the people you’re surrounded by. You also need to be challenged.”

Stepping Up to the Challenge.

Risch knows what it means to give it your all and – most importantly – never give up. Much of her work ethic and resolve comes from having grown up with her six siblings on the family farm in Cooperstown, ND. (The farm is also where she picked up her passion for gardening.) She went on to study at Hillcrest Lutheran Academy in Fergus Falls, MN, as well as Concordia College in Moorhead, MN.

Risch says one thing has remained consistent since joining Gate City Bank 50 years ago: change. And that’s OK in her book. She’s never been a fan of the status quo. It’s too boring, she says, especially when it comes to keeping up with state-of-the-art technology and processes.

Starting in savings, she eventually transferred to the mortgage world. The bank noticed her wide range of talents, and Risch quickly advanced to the roles of mortgage processing supervisor and mortgage loan officer. She was then offered the chance to bring her skillset to the loan administration department, where she excelled to a management role. Risch eventually worked her way up to the roles of assistant vice president and compliance supervisor, as well as her current mortgage compliance officer position, where she helps Gate City Bank operate as an industry leader in compliance.

“I’ve really enjoyed all the different roles I’ve served in for Gate City Bank,” she says. “But mortgages are my favorite. Buying a home is one of the biggest investments a person will make during their lifetime, and as the #1 mortgage lender in North Dakota, we get to help make that possible.”

Whether it was transitioning from typewriters to computers or surviving other major technological conversions, Risch adapted throughout the years – and thrived. She’s learned a ton from great mentors, and she’s mentored fellow team members herself, many of whom are still with the bank.

“I’ve supervised a lot of people over the years, which is not always an easy job,” she says. “When you oversee people, you feel responsible for what they do. You take it to heart. You try to mentor them to be the best that they can be. More than anything, you want them to succeed. This is especially true at Gate City Bank.”

Risch truly loves the culture of camaraderie that exists among team members at Gate City Bank. It’s an atmosphere of trust, and people show genuine care and support for one another. Much of what drives this culture is the bank’s core purpose, which is to create a better way of life for customers, communities and fellow team members.

“It’s truly amazing how respectful team members are of one another,” Risch says. “It’s just a friendly place to work.”

Additionally, the bank invests in team members with excellent compensation, the best benefits in the region and a family-friendly work environment. It’s no surprise that one-third of referrals for new team members come from existing team members.

Work-life balance is also very important at Gate City Bank, which is something Risch has come to appreciate quite a bit, definitely following her diagnosis, and especially in recent years. She worked part time briefly after getting out of the hospital. And while she’s based out of downtown Fargo, ND, since the pandemic hit in 2020, she’s been able to work from home. That flexibility has meant everything.

In addition to the complexities involving COVID-19, Risch lives in the country and has to deal with a long commute, snow and other factors. She’s thankful for the option to work from home, and proud of Gate City Bank for being ahead of the game in implementing the technology needed to make that possible.

“To have the option to work from home has been absolutely fabulous, and our culture and technology make it easy to stay connected with your co-workers,” she says. “Gate City Bank has always invested in us, especially when it comes to providing the best equipment to support our needs.”

Risch also appreciates that Gate City Bank provides the best benefits in the region, especially when it comes to the health plan, which features a low premium and deductible. There’s also a generous vacation package, as well as fully paid maternity, paternity and military leave, among many other perks.

“The benefits are unbelievably good,” she says. “Having a job with Gate City Bank means having security with a fantastic employer.”

Giving Back to Communities.

Risch also loves that Gate City Bank has a passion for giving back to the communities where its team members live and work. Throughout her time at the bank, she’s seen team members’ passion for supporting communities through paid volunteer time, charitable contributions and in-kind donations.

“Gate City Bank stands apart because we believe in our communities,” she says, adding that being a mutual bank has allowed the bank to not have to focus on shareholder profits. Rather, the bank reinvests money directly back into its communities.

Additionally, Gate City Bank makes it fun and easy to give back, often during work hours. Giving Hearts Day is one of Risch’s favorite annual events, for which the bank goes especially big on giving. Through 2022, it has donated over $1.5 million to 300 nonprofits that play critical roles in its communities.

In 2022, for example, Gate City Bank had the honor of donating more than $260,000 to Giving Hearts Day charities. Part of this commitment included $50,000 donated to charities chosen by the community as part of the bank’s annual Giving Hearts Day nomination contest, where five charities each won $10,000. An additional $15,000 surprise donation was made to one lucky charity.

Showing No Signs of Slowing Down (at Least for Now).

Risch’s fellow team members joke that, with her five decades of institutional knowledge and wisdom, she’s not allowed to retire.

When thinking about hanging up her hat, she just smiles. She has no solid plans to call it quits just yet, and is happy right where she’s at for the time being.

“Gate City Bank has always been very special to me because the company really does believe in creating a better way of life,” she says. “It’s for that reason that I’ve worked here for so many years and in so many different capacities. Gate City Bank just brings out that passion in you.”