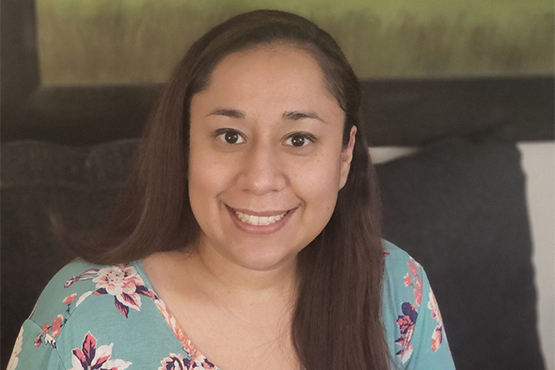 The business, started by Balzer’s grandfather and now owned by her mom, specializes in “shabby chic”-style iron décor used for interior and exterior design. Her family is known by marketgoers for repurposing antique materials that are seemingly weathered and worthless, then giving them new life.

“I guess you could say we have a passion for making old things beautiful,” she says with a smile.

It’s a wonderful sentiment that’s reflected in Balzer’s unique work journey. Years ago, she had to leave her Gate City Bank family to help relatives experiencing health challenges. Little did she know, her bank story was far from over, and the old part-time role she missed would blossom into a full-time career.

Becoming a Friendly Face for Customers.

Born in Texas and raised in Moorhead, MN, Balzer started her Gate City Bank journey in 2011, when she began attending Minnesota State University Moorhead and was looking for a part-time job outside of school. Years of working the family business had taught her a great deal about customer obsession, and she wanted to find an opportunity that would help her strengthen that mindset.

Balzer came across an open teller position at Gate City Bank’s location in downtown Moorhead and decided to apply. The hiring manager admired Balzer’s warm and welcoming personality, and she was hired immediately. Not long after, she was promoted to customer service representative.

Throughout the next two years, countless customers grew accustomed to seeing Balzer’s friendly smile every time they walked through the front doors. She quickly became known as the nice woman who answered their banking questions, asked about their families and translated messages for Spanish-speaking individuals. It was often tough to find area people who didn’t know “Lisa at Gate City Bank.”

For Balzer, this was more than a job. It was an opportunity to show people that she cared – a chance to create a better way of life.

“If you’re not saying hi to every customer, if you’re not constantly engaging with them and letting them know that you’re here for them, they’re not going to want to keep coming back,” she says.

When some of Balzer’s family members began to experience health challenges in 2013, she faced the difficult decision of having to leave the bank so she could help take care of them. It was also a time when she was ready to get married and start a family. While her life plan seemed to change a bit, her connection to Gate City Bank never fully went away.

“I was always running into my old customers at Walmart and Target and having nice conversations with them,” she says with a chuckle. “I feel like we know one another so well. And as I stayed in contact with team members over the years, they eventually started asking if I wanted to come back to the bank.”

In 2018, the stars aligned. Balzer was in a position to return to work, and her former customer service representative position was waiting for her.

“It was wonderful – like I never left,” she said.

After a little over a year of being back at Gate City Bank, Balzer learned her supervisor was going to be out for three months on paid maternity leave and someone needed to lead the team in her absence.

“I was able to step into her shoes for a while in a supervisor role,” Balzer said.

Balzer performed the job well, and was offered a promotion shortly after her supervisor’s return. The opportunity was to work full time as mortgage loan servicing representative at the bank’s corporate headquarters in downtown Fargo, ND. It was the opportunity of a lifetime.

In her new day-to-day, Balzer enjoys staying busy by wearing a number of different hats, while continuing to enjoy the things she’s most passionate about. She especially likes calling customers, coordinating with branches, assisting the Customer Service Center and continuing to translate in Spanish regularly.

“It all worked out so well,” says Balzer, who’s been at the corporate office for more than two years.

Enjoying a Culture of Support, Community Giving and Great Benefits.

One of the many things Balzer appreciates about Gate City Bank is that team members can enjoy a great work-life balance, and supervisors are flexible. When her grandma recently suffered a stroke, Gate City Bank encouraged Balzer to step away from work when needed to take her grandma to appointments.

The same goes for her kids. If they’re home sick from school, she can work from home or take time off to care for them.

“It’s so hard to find employers that support you like that,” Balzer says. “I just love how much Gate City Bank cares about people.”

Balzer also appreciates how generous Gate City Bank is when it comes to giving back to communities. The bank believes in supporting its communities through paid volunteer time, charitable contributions and in-kind donations (such as reduced interest rate loans for nonprofit organizations).

Team members have provided $36.6 million in philanthropic giving and more than 285,000 hours of team volunteerism to over 1,000 charities since 2003. Whether it’s blood drives, food pantries, fundraisers or something similar, Gate City Bank is there.

“Gate City Bank makes it easy for team members to give back in so many ways,” she says. “It’s especially helpful that the bank lets you know about opportunities you weren’t aware of, then encourages you to give back during work hours.”

Balzer also appreciates the competitive benefits that are offered at Gate City Bank. In addition to the caregiver leave and maternity/paternity leave she’s witnessed and experienced, she also appreciates the low-premium health plan, which comes with a low deductible of $250.

At the end of the day, Balzer appreciates how Gate City Bank gives team members countless opportunities to grow and thrive in their careers through training and mentorship.

“Every single one of my supervisors, managers and team members have become mentors to me. I feel like I can go to them with anything,” Balzer says. “If you’re looking for a job where you want to grow, where you want to be part of a family, while not just taking part in a nine-to-five situation where you clock in and clock out, Gate City Bank is the place to be.” 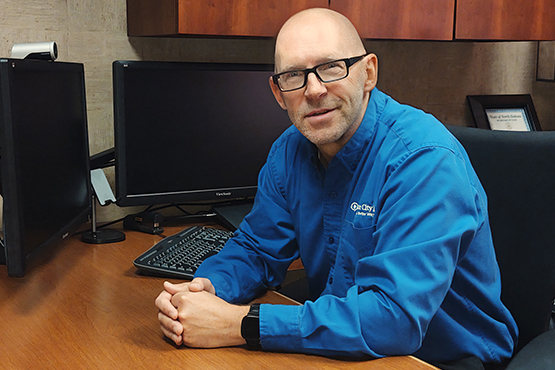 Meet Darryl Jorgenson! If there’s anyone who fully appreciates what it means to take a leap of faith, it’s him. From leaving a successful former life for something better to helping customers with PPP loans during the pandemic, he’s discovered a knack for adventure – and found an amazing work family along the way.

Our own Phil Swan has an amazing story to tell! He’s a former police officer who has served as fraud manager at the bank since 2018, helping to protect customers from security threats, scams and identity theft.